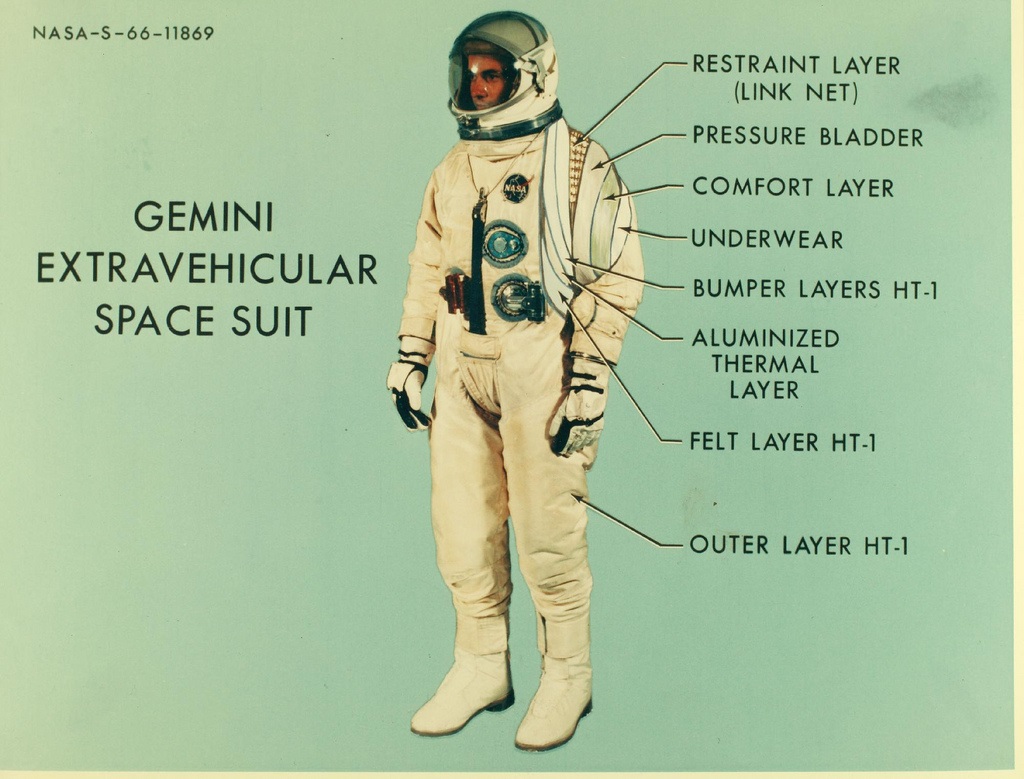 Wired ran two opinion pieces recently about dystopian science fiction possibly scaring us away from new technology, the second article is a riposte to the former. Coincidentally I had also been mulling over a blog on the subject of science fiction and technology.

To contribute to the debate on Wired first, writing about dystopian world makes for a more interesting narrative then a utopian one. The success of Huxley’s book ‘Brave New World’, and indeed the less famous ‘Island’, is the amplification and exaggeration of trends we can already see in the present.

Retro-futurism has shaped the Dot Dash brand since the start impacting our logo, website and overall aesthetic. Retro futurism is defined by Wikipedia as the “influence of depictions of the future produced in an earlier era”. But not steampunk, please god no!

In many of our projects we like to look backwards before looking forwards. Here we discuss the impact and potential impact of these movies and books (and such) on technology and culture.

So why are we writing about science fiction films? We are interested in the interfaces of the future and modes of interaction with technology in the short to medium term. As are many of our clients.

(It’s also more fun to write and read about than the top 5 tips to a successful Twitter account! But we have those too!)

It also gave me an excuse to read about, watch and think about these films all over again. If anyone hasn’t watched them all, I’ve kept any spoilers to a minimum, but there are some.

Our selection criteria is that the films needed to be set in the future, introduce new technology and have a predominantly earth based plot (and Wall E slips in by the skin of its robotic arms here!)

We’ve also stayed away from out and out dystopian flicks here although we may revisit some of our favourites: Brazil, 12 Monkeys, The Road, Stepford Wives, Delicatessen and more at a later date! In the meantime make sure you watch the brilliant and terrifying ‘Utopia’. Series 1 is on Netflix and series 1 & 2 is on 4OD! 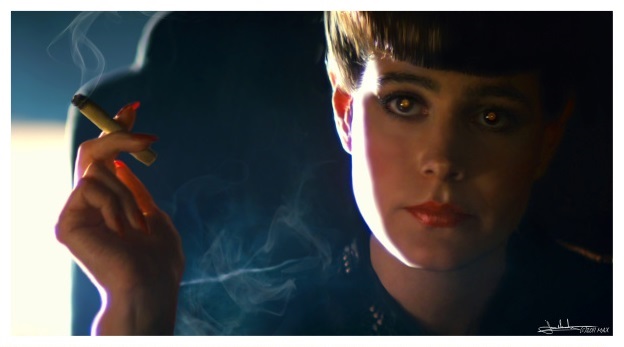 Blade Runner was voted as one of the greatest science fiction films of all time in a poll of 60 eminent scientists. Set in our near future, 2019, Blade Runner is an adaptation of Philip K Dick’s ‘Do Androids dream of electric sheep’ published in 1968!

Ford is cast as a bounty hunter charged with tracking down and eliminating a gang of replicants that have landed on earth. Aesthetically the film’s imagined world marries high tech with a decaying world.  In it we are shown a future cityscape that is dominated by huge neon billboards.

Although the film is set in LA in 2019, when I first saw it I was convinced this was what Tokyo might look like in the 80’s and I have wanted to visit Tokyo ever since! If I ever get there and it doesn’t look like the set of Blade Runner I’ll be seriously disappointed.

The film asks question about mortality, the future direction of genetic engineering and cybernetics, to a degree it also covers where the internet of things meets robotics.

The 2000AD comics took many cues from this retro-futuristic film noir, especially the Robo-Hunter stories.

Why they want to remake, and likely ruin the original is beyond me. The script is apparently written and the film will have Scott at the helm directing and will star Harrison Ford as well! 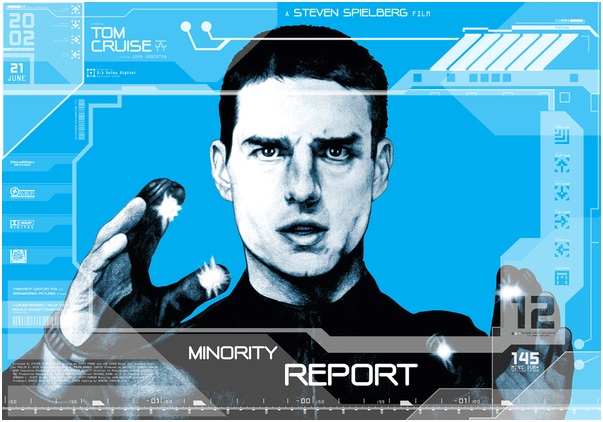 Based on a 1956 short-story by Philip K Dick, yet again, see Blade Runner above. In 2054 a special pre-crime unit is set up to prevent murders, arresting the still innocent based on crimes yet to be committed.

Spielberg hired a team of futurists, including Joel Garreau, to devise the technologically advanced gadgets used in the movie. I love the idea of gesture based navigation of information, think XBox 360 or Nintendo Wii on steroids. Similar gesture based UI can also be seen in both the Iron Man and Avengers Assemble films.

The illicit trade in eyeballs shows where biometric information might lead. We need look no further than passports and iPhones to see the use of biometric data today, with surely more to come. 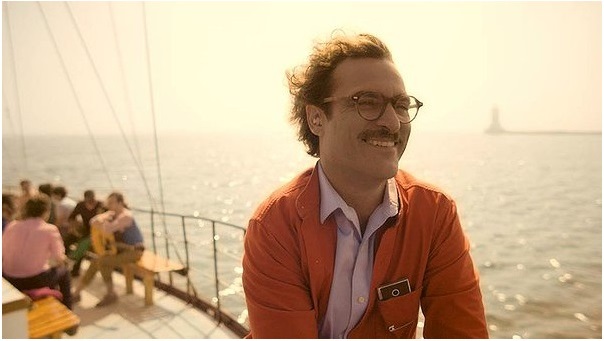 Written and directed by the enormously talented Spike Jonze and scored by Arcade Fire. Her is set in 2025 as a lovesick and withdrawn writer, Joaquin Phoenix, develops a relationship with an operating system (O.S.). The O.S. is played entirely off screen by Scarlett Johansson.

Jonze digested the work of optimist and futurist Ray Kurzweil when developing the film.  The technology used is most evident by its absence from the screen. The narrative focuses on human relationships, but also on explores our increasingly introverted device and by extension software affair.

The film also explores the human condition, our ennui, narcissism and isolation driven by our relationship with an ‘always on’ world. Broaching the subjects of cybersex, the impact gaming might have on entertainment and if technology can become a substitute for real companionship. However, it is through the scenes around gaming where the future technology is at its most evident.

On the dystopian scale where we have Terminator, the Matrix and even child friendly Wall E down one end, Her is definitely is at the more benign end of it. The future looks quite nice actually. If the worst thing that happens humanity is finding companionship with an O.S. voiced by Scarlett Johansson I’ll take that! 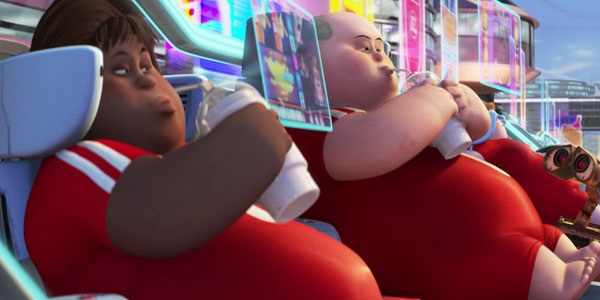 Earth has been trashed, literally, and this is where our titular hero comes in. Wall E (Waste Allocation Load Lifter – Earth-Class) is the last survivor of a team of robots left behind to clear up our debris while our future ancestors orbit in space.

With parallels to Her, our future selves experience life through devices and a screen based world. We’ve also given up walking anywhere and are transported in hovering recliner chairs, where we consume, converse and blithely bob along.

The film predicts our eventual enslavement by technology, which by catering to our every whim eventually diminishes our ability to fend for ourselves, right down to something as basic as walking! Human kind becomes redundant.

The scenes shot on the Axiom have the look and feel of Star Trek Voyager, hyper modern, but brighter, clean and sterile. Whereas those set on earth mainly show Wall E picking through the detritus of humanity.

As an aside, this future sterile environment becomes a funny sub-plot with one of the robot cleaning crew.

Environmental disaster looms, while humans become a helpless and doted upon species, by the internet of things and hyper efficient task specialised robots, who are only occasionally prone to malfunction.

Put Sly Stallone out of your mind for this one. This version sticks more rigidly to the Judge Dredd character who first appeared in 2000AD comics back in 1977. The screen play was written and produced by Alex Garland (best known for his novel The Beach and screen plays for Danny Boyle’s 28 Days Later and Sunshine).

The film tackles similar topics to Minority Report. Dredd, played by Karl Urban, is a law enforcement agent of the future, given the power of judge, jury and executioner in the future metropolis Mega City One.

This is one film best seen in 3D, particularly the slo-mo scenes. Slo-mo is a designer drug that has swept through the enormous 200 storey tower blocks, with one of these featured in the movie ruthlessly controlled by drug lord Ma Ma (brilliantly played by Lena Headley, best known for Game of Thrones).

These scenes are often shot in the first person perspective. Liquid takes on an almost solid, gelatinous state, droplets shimmer in microscopic detail and colours become saturated. These scenes are stunningly shot and best viewed on a large screen.

While most of the technology on display relates to law enforcement, principally weapons and vehicles. News Vids, newspapers in digital form, are a fore-runner for graphene based flexible electronics.

The film’s impact on technology is as much about the great 3D effects as finally having a film version that does justice to a long-time anti hero of mine. This film was not initially successful but has developed cult status since its theatrical release. If you’ve seen it and enjoyed it as much as I did then sign the petition to make a sequel here!